Who was Dave Evans ? 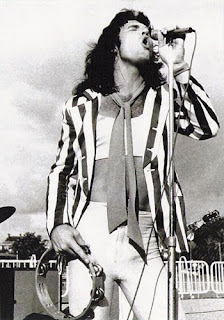 DAVE EVENS
LEAD VOCALS (1973-1974)
In the beginning AC/DC was going around to local nightclubs for gigs like anyother new rockband would to get their name out there. Their first gig was at Chequers Nightclub in Sydney on New Years Eve 1973 and the band went on to attract a strong live following in the next few months before recording their first single - "Can I Sit Next To You Girl?" and "Rocking In The Parlour"
At this time Angus started wearing his now famous schoolboy uniform and with their single racing up the national charts AC/DC undertook a gruelling tour beginning at the Sydney Opera House and then playing to packed houses all around Australia. Life on the road is tough for any band and frictions and egos increased steadily until a punch-up between Evans and their manager made life on tour unbearable - and a split between Evans and AC/DC became inevitable.
Bon Scott was a friend of Malcolm and Angus. He agreed to join AC/DC, by this stage one of the most promising and exciting rock bands in Australia, and he and the band went on to rock 'n' roll immortality as one of the biggest bands in the world.

Did you know about Dave Evens before today?

What is your favorite AC/DC album?